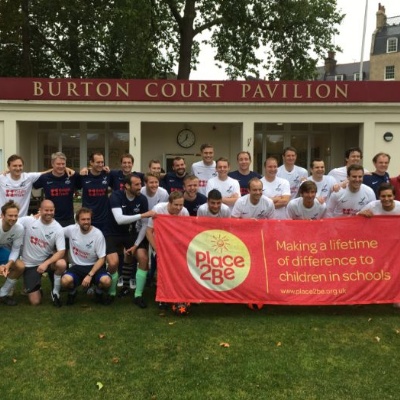 Thank you to everyone who played, whether it's for your enthusiasm to make this event happen, for donating, for playing, refereeing or spectating - we pulled it off expertly at Burton Court on Saturday, under the rain, with Gerald, Janet and Simon all on the touchline for the duration of 2018's exhibition match of SETS football.

With nearly 59yrs combined Sets footballing experience between Ed and I, and an incalculable, cumulative amount between us all - we opted for x2 Balls, to accommodate roughly 15-a-side on Saturday, which worked very well. The usual chaos ensued, with the two balls colliding at someone's feet on an occasion, own goals from both sides, balls being kicked and sliced in the wrong direction, all resulting in a sporting spectacular for both players and spectators alike.

The game was close! At 8-8 after 60 regulation minutes of enthralling Sets football, "Next-goal-wins" was announced and the Blues were the first to hit the target...win for the Blues. But as ever, Sets football was really the winner.

Our photographer took over 1300 snaps - link to be added soon!

Well done to everyone who donated. Place2Be were utterly delighted to have raised what we did and to have been involved with us all on the day. They're a great charity and given their involvement with treating depression in School Children, it feels very appropriate to have them as our chosen-charity for this Old Ludgrovian event.

This event is only made possible by your involvement, so thanks again to everyone.