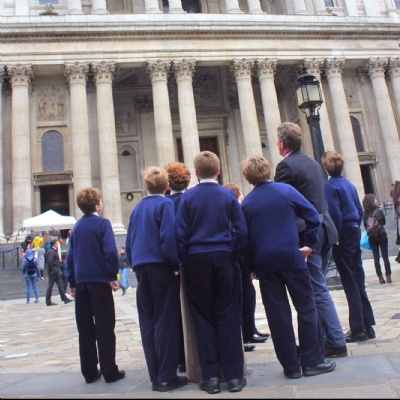 A visit to the Courtauld Institute Gallery and the Tate Modern.

It is a sign of the times that the first item on Monday’s agenda was a briefing on what to do in the event of a terrorist incident in London. Happily nothing untoward happened that day in the capital; Las Vegas was not so lucky.

The group set off after breakfast and took the 9.26am train from Wokingham to Waterloo. Then the Bakerloo Line saw us at Embankment. Passing Cleopatra’s Needle, we arrived at Somerset House and our first port of call, the Courtauld Institute Gallery. Mrs Baker and Mr Romanes tried to elicit the boys’ reactions to the paintings and to offer some historical and cultural background information. It is a wonderful place to use to try to introduce children to the History of Art, with an extraordinary richness of paintings by talented artists including Botticelli, Van Dyck, Reubens, Reynolds, Cezanne, Monet, Manet, Renoir, Degas, Van Gogh, Seurat, Picasso and Modigliani. It is a small gallery and the peace of the place was not disturbed by the presence of the boys, as they were engaged and interested.

It is a tiring thing to be on one’s feet for so long, so we had lunch in a restaurant near Covent Garden before taking a Number 11 bus along the Strand and Fleet Street to St Paul’s. From outside the classical influences on Wren were looked at before we headed south over the Millennium Bridge towards Tate Modern. The Turbine Hall had a suitably maverick work to consider: ‘One Two Three Swing!’ by the Danish art collective Superflex. The curator has described the installation as “conceptually clever, sculpturally beautiful and elemental”; the boys were encouraged to form their own views. In one gallery, the boys were asked which of the artworks they would choose to take home (with money not to be considered!).

The trip is aimed at trying to let the boys realise that their views are entirely legitimate, as long as they can back up their opinions with arguments and justifications. In one’s schooldays, too often knowledge is confused with intelligence; the ability to think needs to be nurtured. Looking at Art, especially for the first time, can be uncomfortable: there are no ‘right’ answers. That is why an Art Trip is such a good thing for a group of putative scholars.