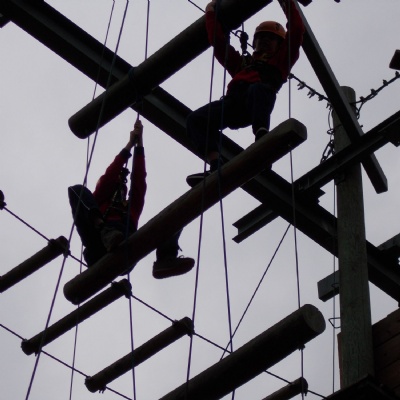 On Tuesday 11th September, the top year enjoyed a leadership & team building activity day at the Oakwood Centre, just down the road from school.

They were split into four groups and during the course of the day took part in various activities. These included the “leap of faith”; where they had to climb a pole and then stand on a small platform at the top followed by a leap into thin air in order to grab a trapeze. To a man, all the boys gave this their very best with most successfully completing the task. Once the adrenaline had calmed down, they were then required to climb a giant ladder working in teams of two whereby the rungs of the ladder were sufficiently far apart that they had to help each other; all teams completed this successfully!

The main team building exercise was the low ropes, where they needed to come up with strategies to overcome a number of obstacles. This needed the boys to identify individual skills within their teams and use them to their best advantage putting any egos or delusions aside. This was a fascinating exercise, especially when the instructor chose to blindfold the more vocal members of each team.

The last two activities were “mountain boarding”, which was possibly a misnomer given we were based just outside Wokingham, and the climbing walls. The boys loved both of these pursuits and I fully expect the Oakwood centre to benefit from numerous birthday outings over the coming months.

Overall, this was a highly productive day where the boys learnt much about themselves and the merits of clear communication and working as a team. I would also add that they were outstanding throughout the day and we have already received an email from the lead instructor to this effect. Finally I should probably mention that both Mr Austen and Mr O’Conor successfully completed the “leap of faith”, whilst the quinquagenarians abstained!

Further pictures of the boys' day are here.